Try the no-prep way to teach Using the Relationship Ruler

The closeness of a relationship dictates what we say, how we say it, and how we act. Students will learn the different categories of relationships and the rules for sharing information and personal space at each level. 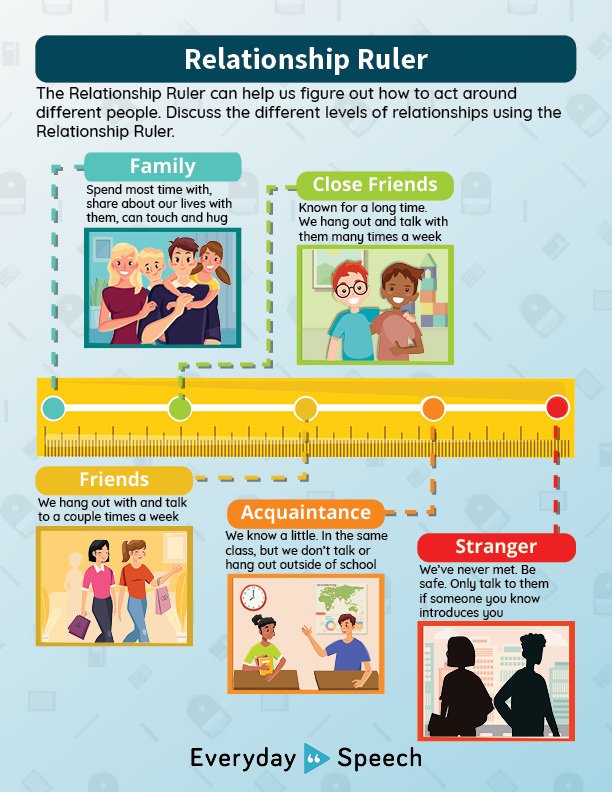 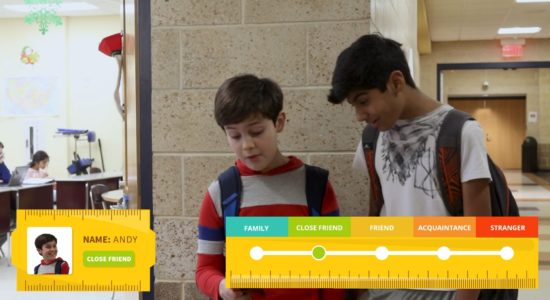 Narrator: It’s important to think about the relationships you have with different people because we act differently around them.

(Man 1 thinking about his relationships with different people.)

There are different levels of people in our lives. Depending on how long we’ve known them, there are actions we should or should not do.

The Relationship Ruler (relationship ruler icon appears) can help us figure out how to act around different levels of people. We’re often closest with our family. We’re around them all the time. We share more about our lives and can physically touch or hug them.

The next level is our closest friends. These are the friends we’ve known the longest. We hang out and talk with them outside of school many times a week.

Next, we have our friends. These are people we’ve known for a while because it takes time to build friendships. We talk and hangout with these people outside of school.

Then, we have acquaintances. These are people we know a little. We might be in the same class and have had a couple conversations with them, but we don’t talk a lot.

Lastly, there are strangers. These are people we don’t know at all. It’s important to be safe around strangers. We only talk to them if someone you know introduces you.

Let’s see what it looks like when Jackson uses his relationship ruler.

<SCENE 1 At the Hallway>

(Boy 1 approaches boy 2 in the hallway.)

Jackson: Hey, what are you playing?

Andy: Hold on. I’m about to beat this level.

Jackson: Oh, about to beat this level? (Playfully tries to take the phone from Andy.)

Andy: (laughing) I still beat it!

Jackson: Come on! Next time.

(Both boys enter the classroom.)

Kai: Oh, it’s not too bad. But there’s just a lot of information in chapter 3.

(From My View icon appears.)

Jackson: (voice over) When I see other people, I use the Relationship Ruler (relationship ruler icon appears) to think about how close we are. Andy is a close friend. We always try to mess each other up when we’re playing games, so I know it’s okay. This is a special way we joke around, but only with each other, and I know it won’t make him upset.

Kai is more of an acquaintance. I sit next to him in school, but we don’t talk very often. I usually say good morning, or if I have a question about school, I’ll ask him. I wouldn’t roughhouse or joke around with Kai. That would feel weird. I change the way I act depending on where the person is on the Relationship Ruler.

Narrator: Jackson was able to use the Relationship Ruler (relationship ruler icon appears) to know how to act around different people. When he saw his close friend, Andy, he joked around and tried to mess up his game.

Boy 1: (to boy 2) Oh yeah? You’re about to beat this level… (playfully tries to take phone away from Andy).

Narrator: Some friends might get upset at this, so he wouldn’t do it to everyone. This is a special joke they share, that they know is okay to do with each other without hurting each other’s feelings.

WHAT DID WE LEARN?

Narrator: So, what did we learn? The levels of relationships are: Family – closest with, can hug and share; Close friends – known a long time, hang out a lot; Friends – talk and hang out a little bit; Acquaintances – only know them a little; Strangers – don’t know them at all. 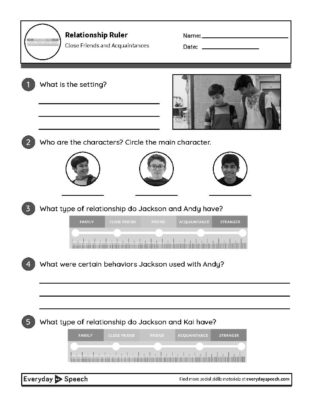