Give your students the right tools to master Conversation Measuring Cup 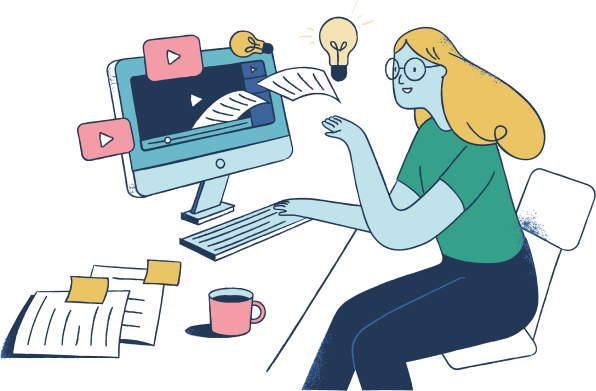 The Conversation Measuring Cup is a visual tool that helps learners determine their length of responses based on how their communication partner acts toward them. Clues such as mood, rushed or calm behavior, and the amount someone else is talking inform us how much we, in turn, should talk. 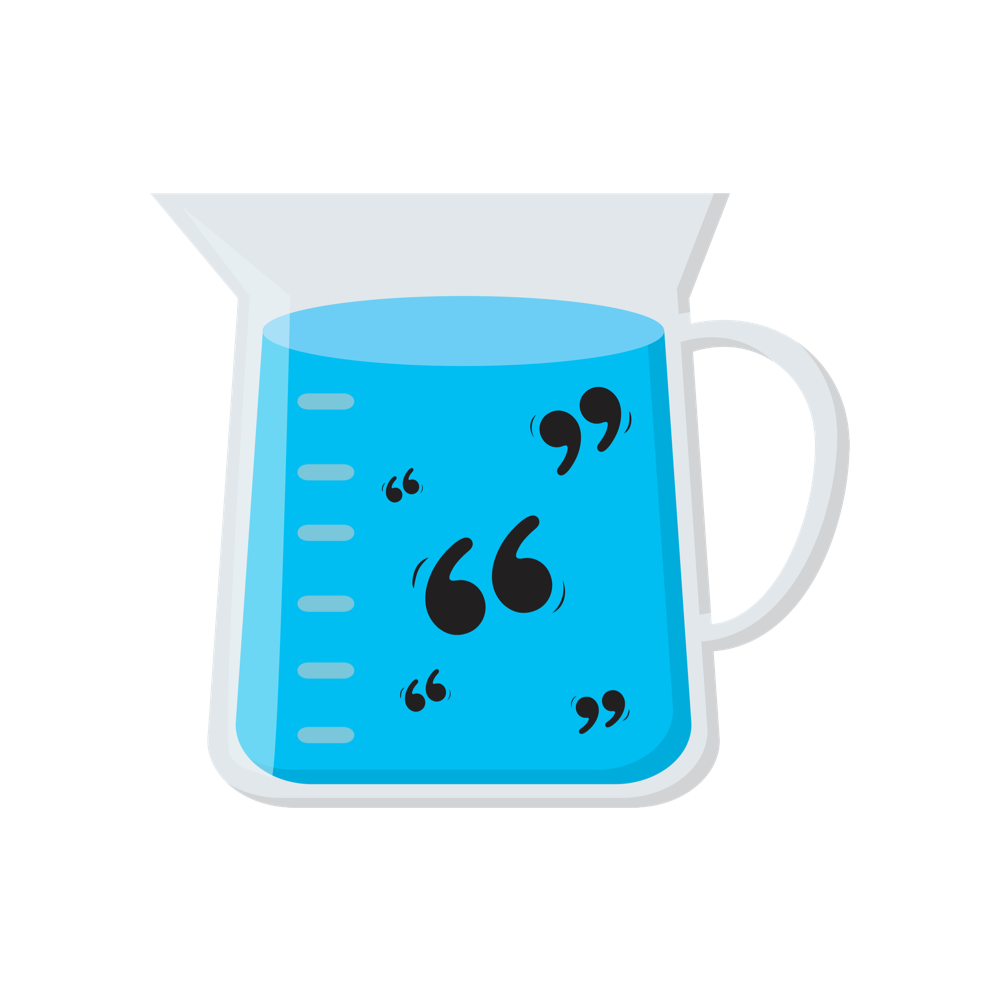 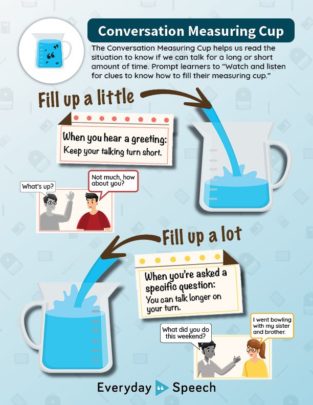 Download
Our Platform has 2 Videos, 2 Activities and 2 Games on Conversation Measuring Cup
Start Your Free Trial

SOCIAL SKILLS IN ACTION (SSIA) – Connor learns to use the Conversation Measuring Cup, a tool that helps students visually see how much they should be talking in certain situations. There are certain times where a shorter response is best and other times when a longer response is more appropriate.

Narrator: Our conversations with others are always different. Sometimes we have long conversations and sometimes we have short ones. There are times when we are supposed to give a short answer to a question, and then there are other times we can give longer answers. The trouble is if we switch up these times, we can make people feel confused or uncomfortable. To help us know how much we should be talking, we can use our conversation measuring cup.

When we don’t have a lot of time to talk or someone else needs to tell you something, it’s time to give a shorter answer. This would only fill the conversation measuring cup a little bit. If we have a lot of time to talk or you’re getting signs that someone really wants to talk, we can give a longer answer. This would fill the conversation measuring cup almost to the top. We always want to make sure others have a turn to talk too. We can tell our story or a long answer and then wait to give them a chance to talk.

Our conversation measuring cup tells us to: talk a little when a friend says,”Hey” or “What’s up?”; talk a lot when people ask us lots of questions and show interest; remember to give others a chance to speak no matter what.

Let’s watch what it looks like if we don’t use the conversation measuring cup.

Connor: I am having the luckiest day ever! First, I found $20 in my pocket. I’m super excited because I’m saving up for a new game. Then, I was supposed to have a quiz in Science but the fire alarm rang so we won’t have it until tomorrow. This gives me way more time to study.

Connor: I know! I didn’t have much time to study for Science last night but I’m totally free tonight. I wonder what else will happen today. Maybe I should play the lottery and I’ll win big!

Narrator: Did Connor use the conversation measuring cup? Was it a good time to give a long answer like that? Let’s see what Madison is thinking.

Madison: (thought bubble)I wasn’t expecting Connor to go on like that. Usually when someone says, “What’s up?”, I say one small thing. I didn’t expect him to talk that much.

Narrator: Madison was feeling a little confused when Connor gave a really long answer about his day. Connor didn’t use his conversation measuring cup. If he did, he would have realized that it was time to give a short answer. When people asks us “What’s up?”, they usually think they’ll get a quick sentence back. Connor could have said, “I’m having an awesome day! I found $20 and my Science quiz was postponed because of the fire alarm.”

Now let’s see a time for a long response.

Madison: Hey, Connor! How was Science class? I know you had a big quiz.

Madison: Well, you look happy. How did you do?

Narrator: That time, Madison was disappointed because she had more time to talk and wanted longer answers. Connor should have thought about the conversation measuring cup to figure out that this was a time to give a longer answer. When people ask us a lot of questions, that’s a clue that they’re in the mood to talk and want to hear from us. When Connor gave such short answers, it didn’t make for a very good conversation. How were these two scenarios different?

In the first scenario, Madison said, “What’s up?” which is a polite greeting but not a specific question. Madison was looking for a short answer in return. The second time, Madison asked Connor specific questions which means she wanted to have a longer conversation. Connor only gave one word answers back and his voice and body language wasn’t very excited or enthusiastic which made Madison feel like he didn’t want to talk.

If someone asks us a general question like, “How’s your day?” or “What’s up?”, they usually want a short answer. But if someone asks you about something more specific, they’re letting you know it’s okay for you to talk for a longer amount of time. Use the conversation measuring cup and think about the questions they’re asking you and how long they are talking to help you know how long you should talk for.

[WHAT DID WE LEARN?]

What did we learn? Our conversation measuring cup tells us to: talk a little when a friend says “Hey” or “What’s up?”; talk a lot when people ask us lots of questions and show interest; remember to give others a chance to speak no matter what. 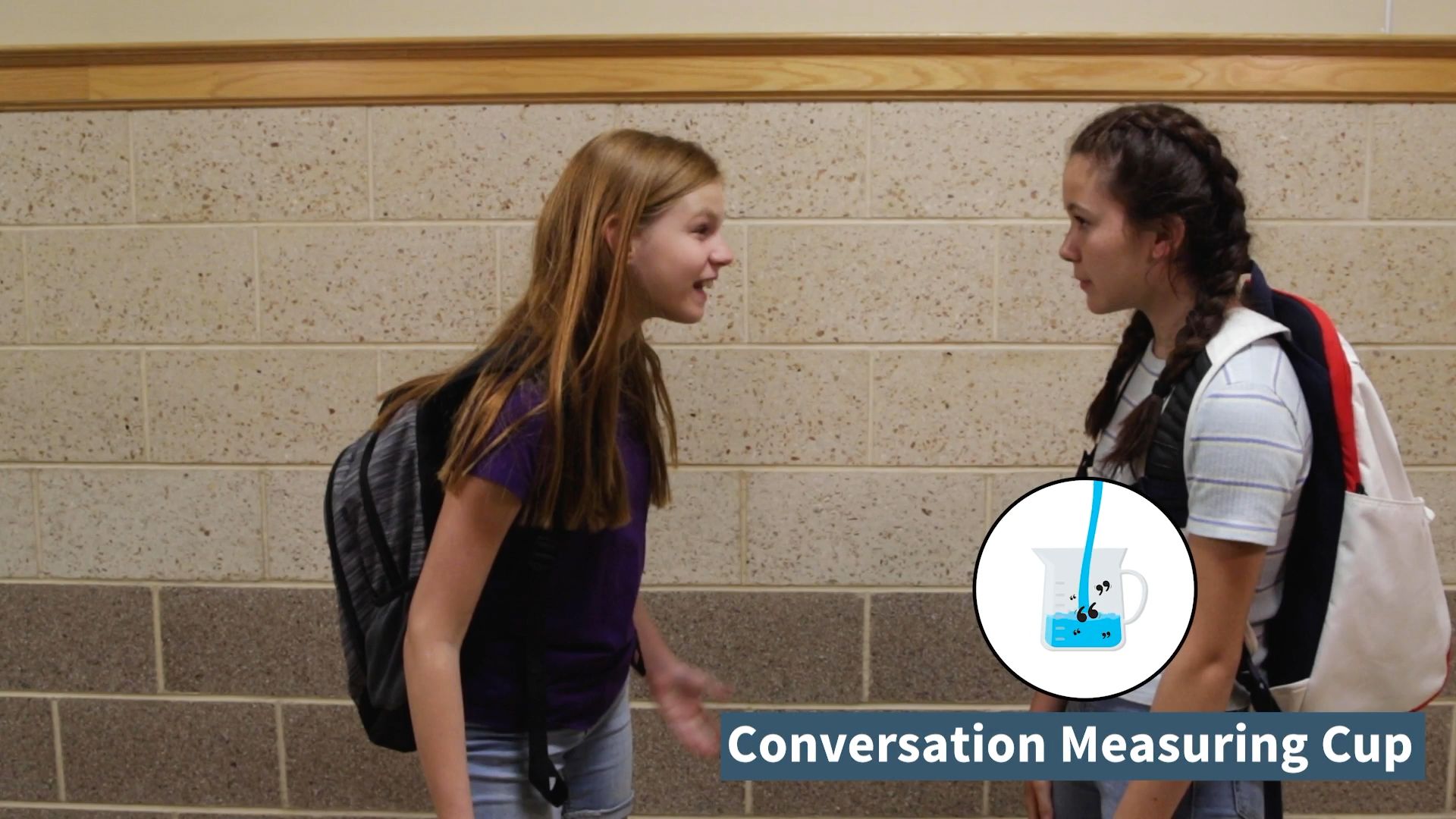 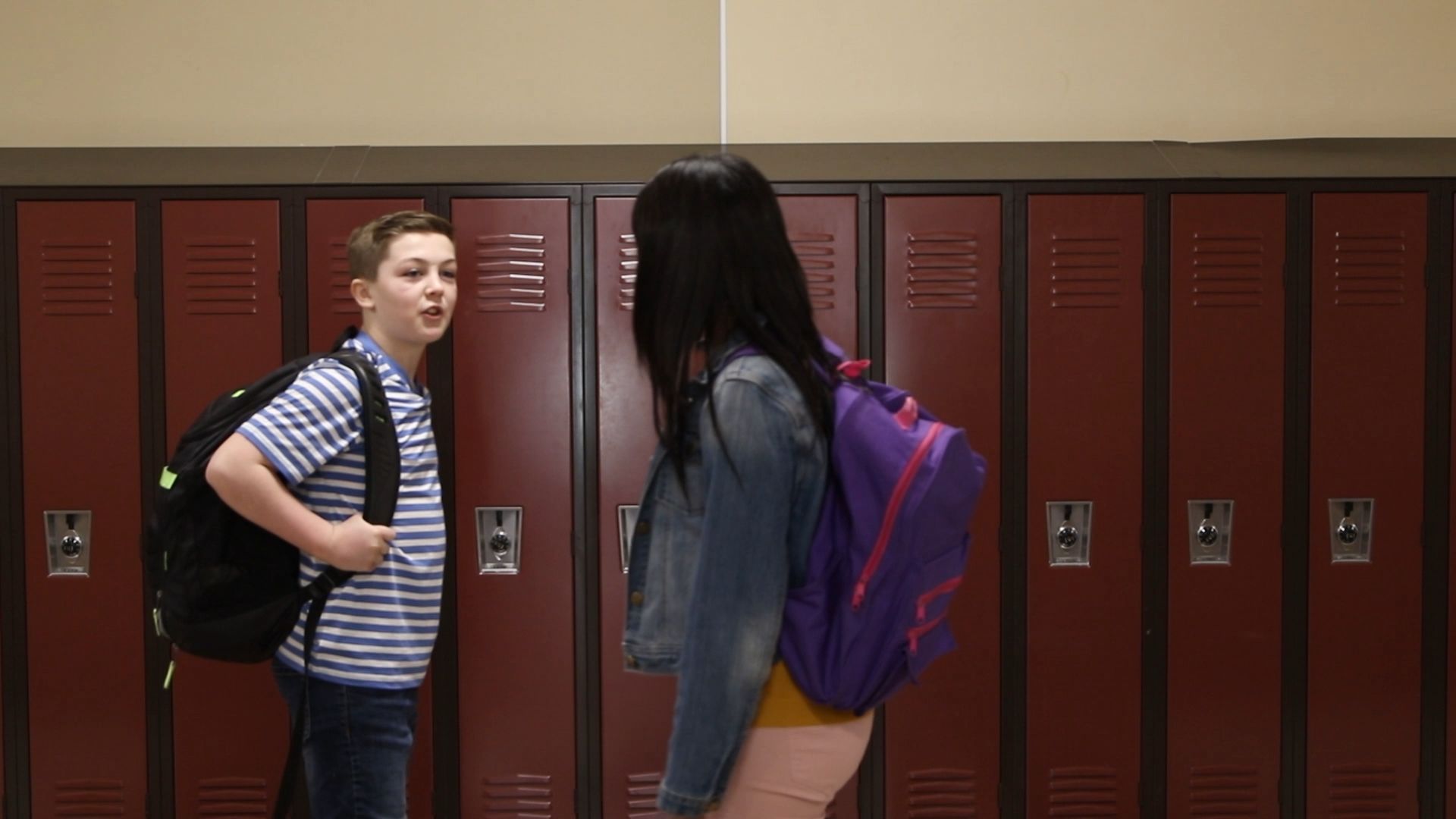 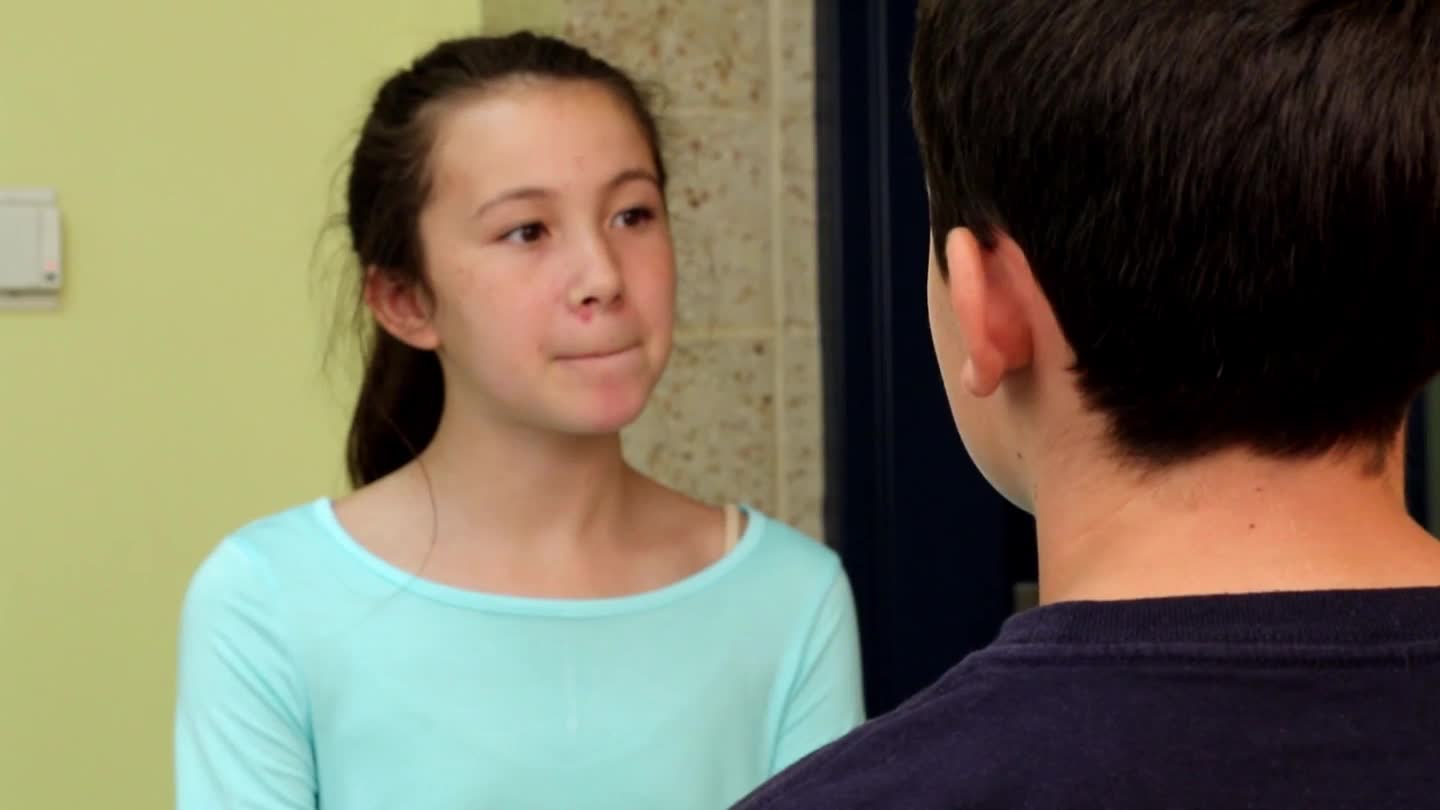 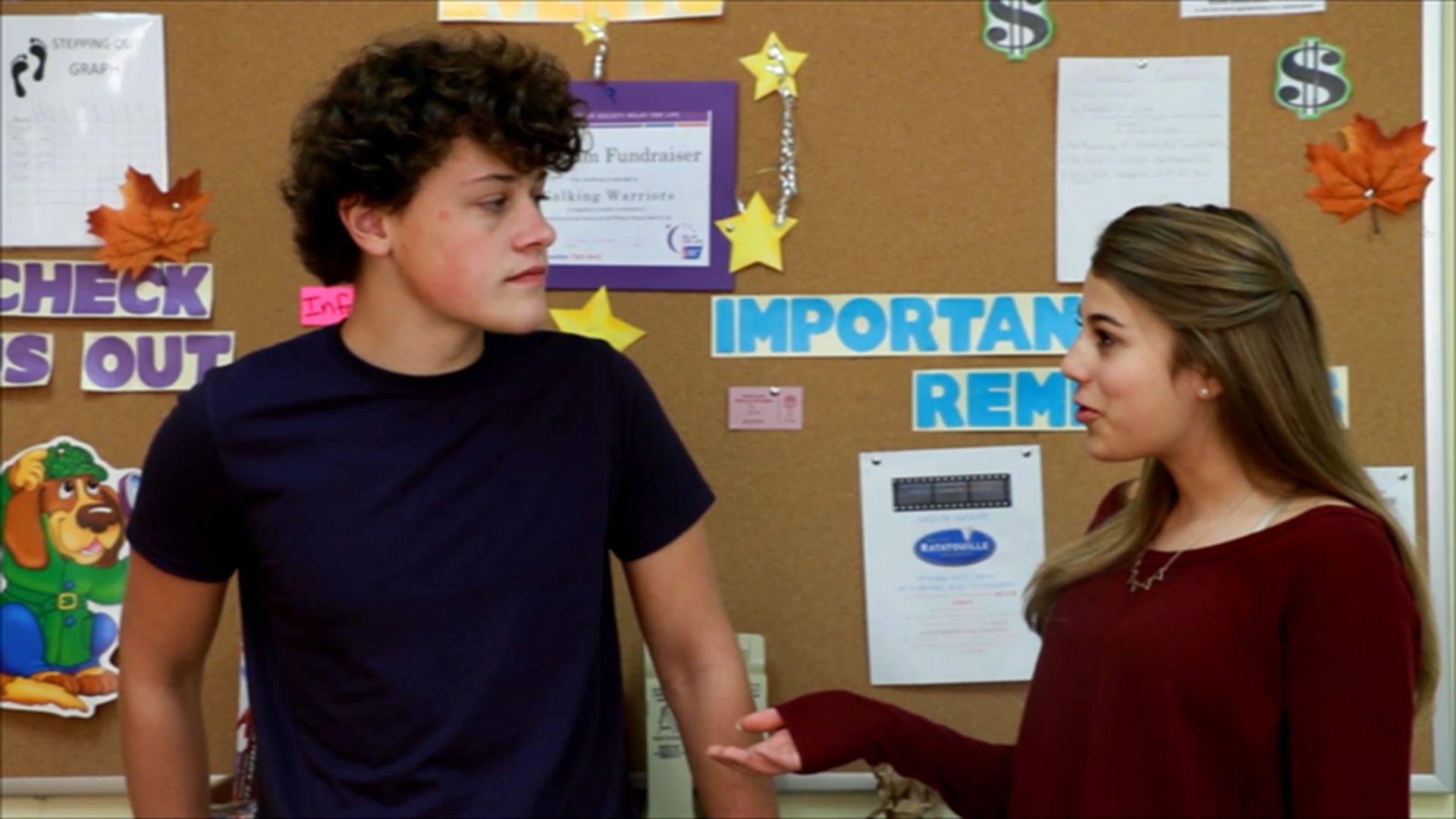 Length of Turn in Conversation 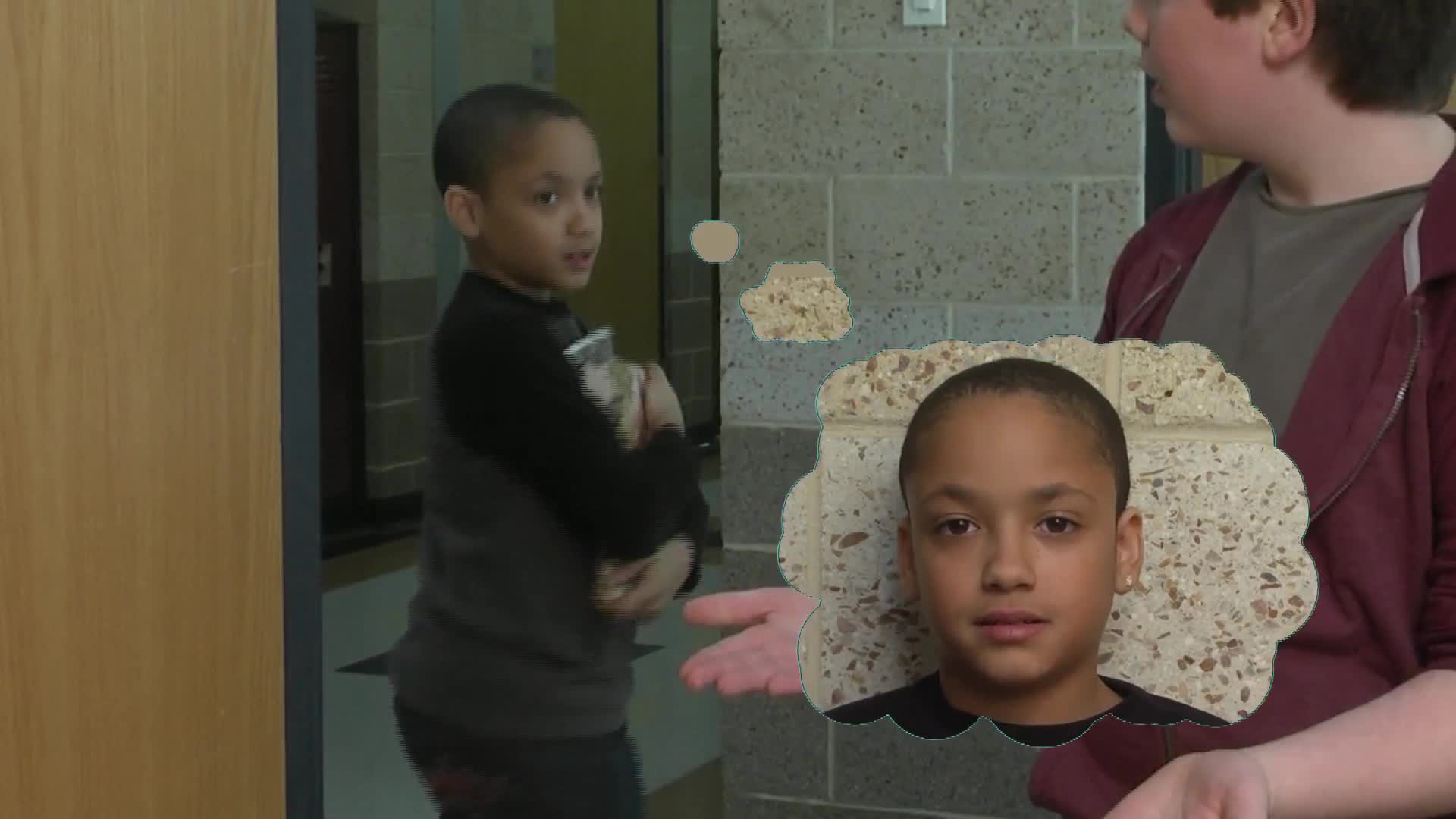 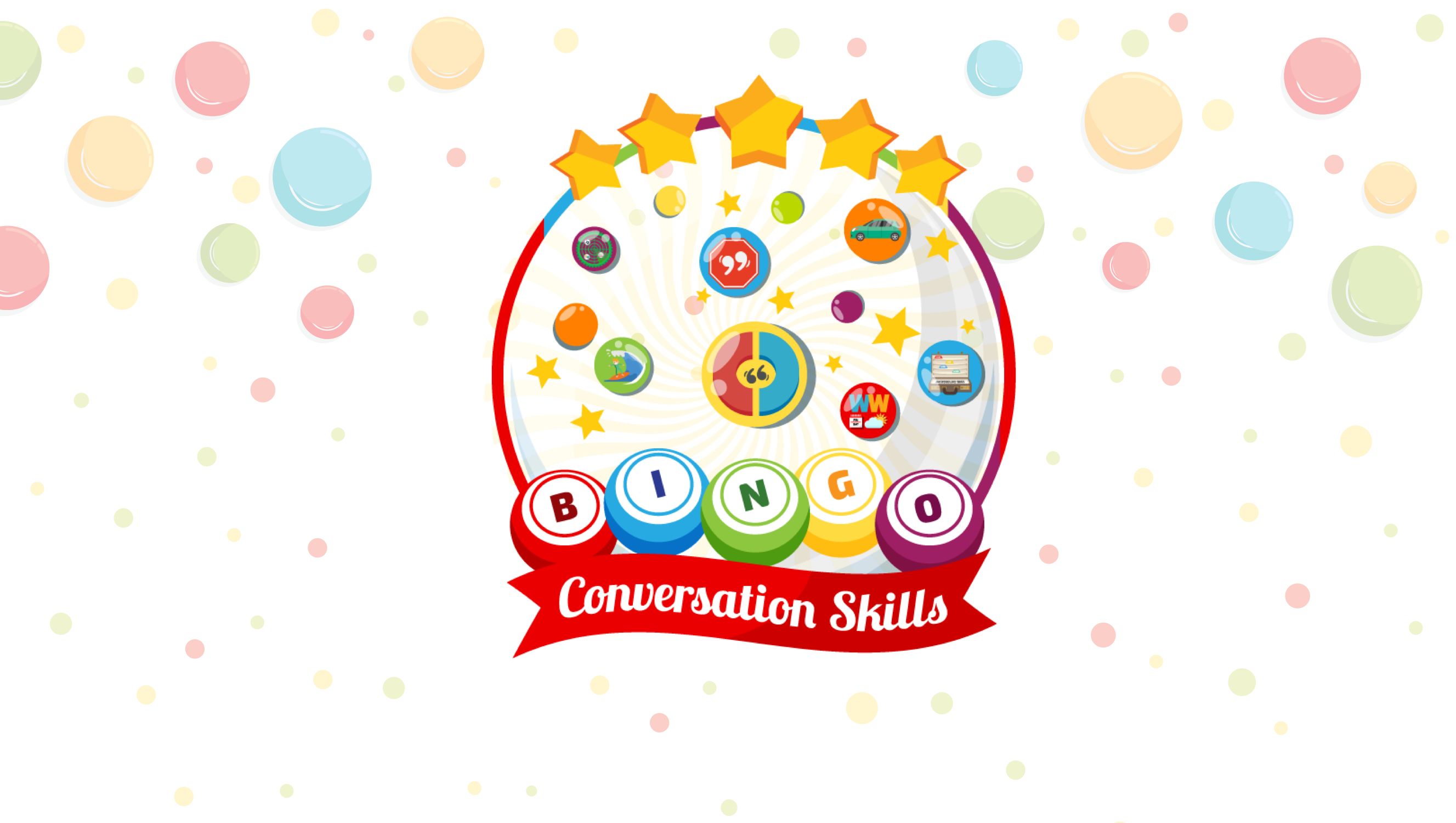 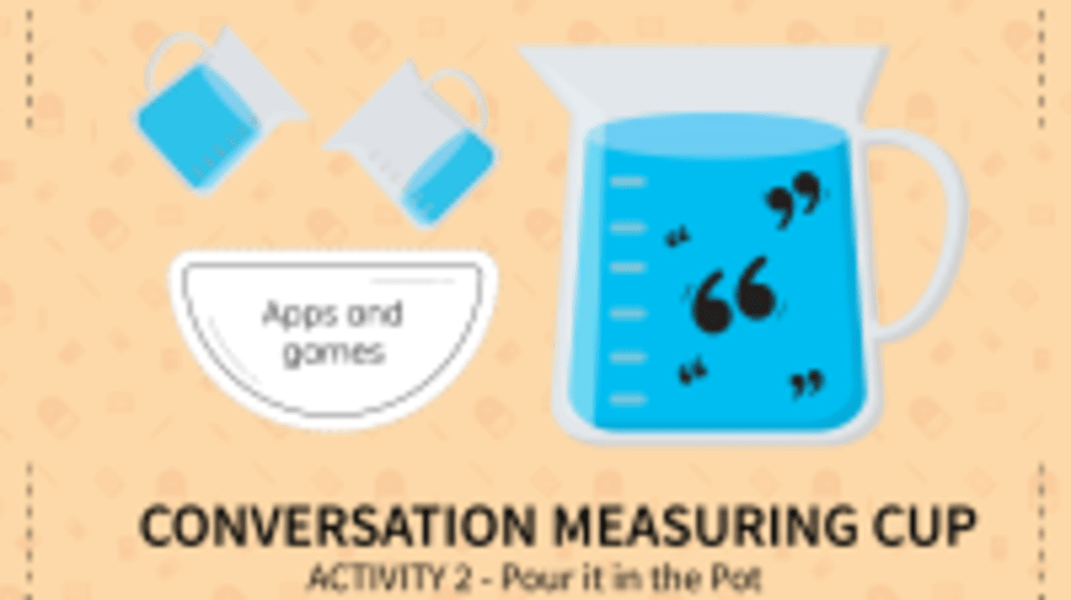 Pour it in the Pot 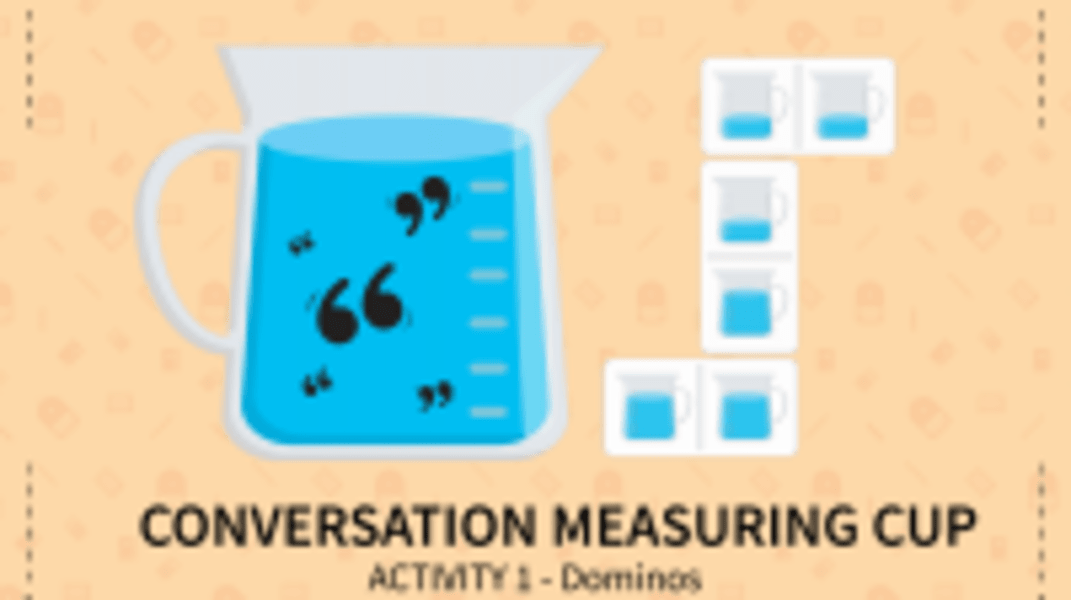 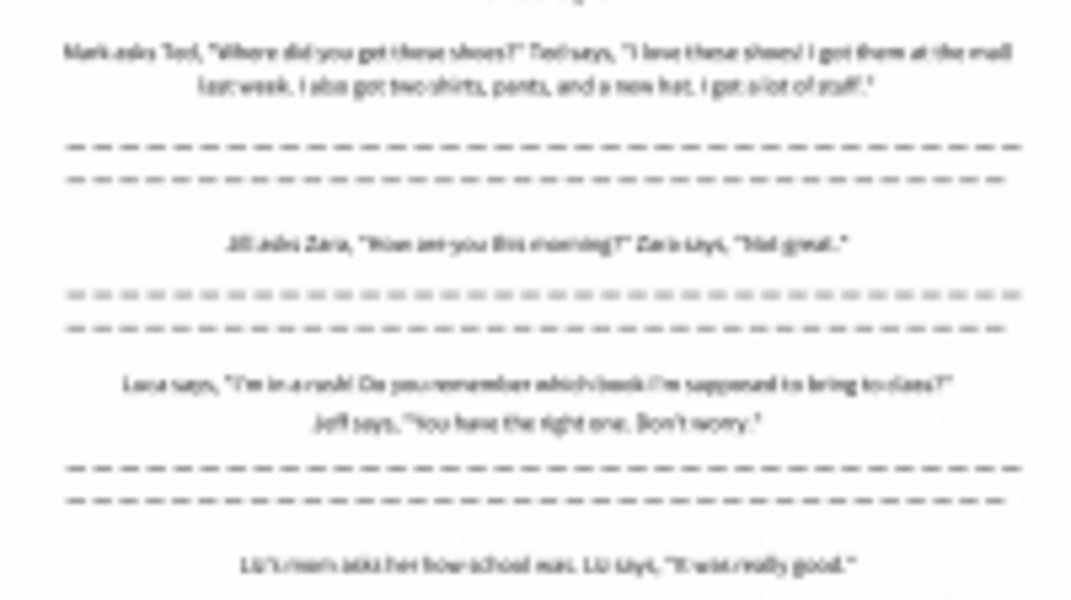 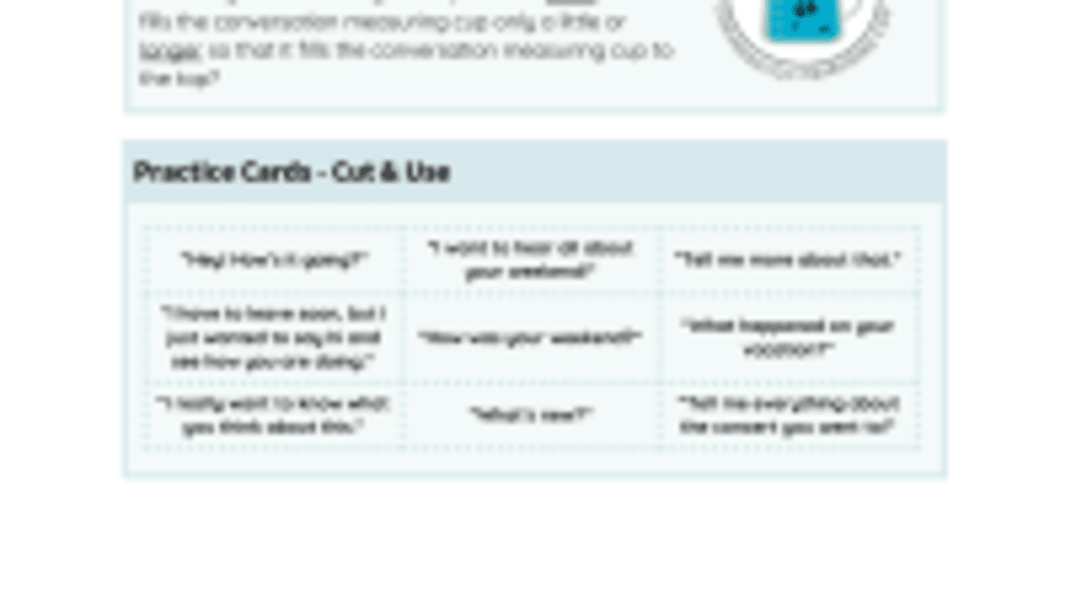 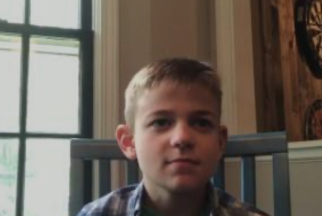 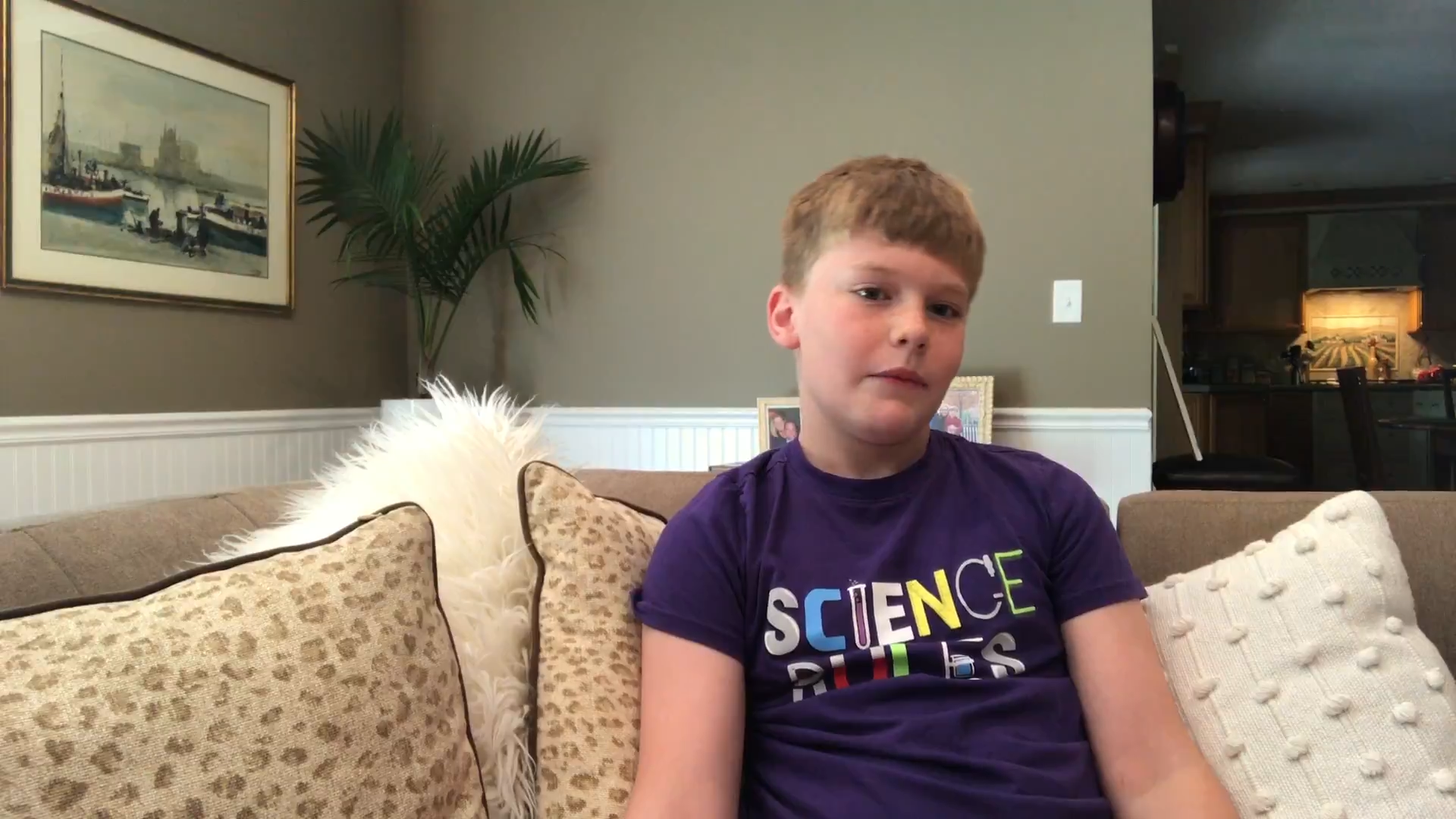 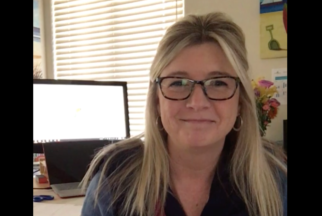 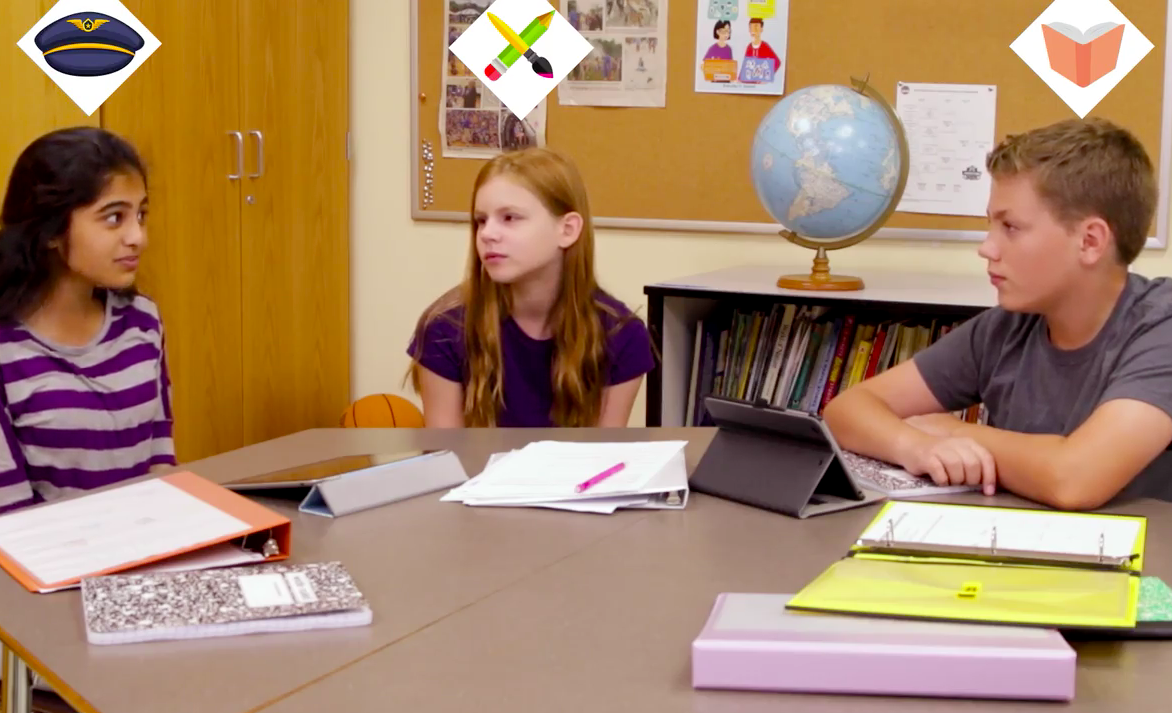 Get free no-prep lessons every week, straight to your inbox.

Join 100,000+ educators and parents who love our free, no-prep materials.

Click the arrows to select a month, click on a square to select a day.
You need to select a starting date between August 16 and December 31 .